According to a source familiar with the matter, Goldman Sachs appears to be gathering information and requesting commitments from Web3 crypto funds, funds that specialize in distressed assets, and conventional financial institutions with plenty of cash on hand. The participants in the fundraising effort would then probably handle the assets, which would most likely be cryptocurrencies that had to be sold for pennies on the dollar.

Alvarez & Marsal, a restructuring advising company, has been hired by Celsius, according to a Friday afternoon Wall Street Journal article. A request for comment from Goldman Sachs was not answered.

In a surprise announcement on June 12, Celsius, which as of May this year had more than $8 billion loaned to clients and $12 billion in assets under management, said it would no longer allow withdrawals from its platform due to “extreme market conditions.” These circumstances were made worse by the announcement, which momentarily caused bitcoin to trade below $20,000.The Wall Street Journal reported earlier this month that Celsius has also hired restructuring lawyers from the law firm Akin Gump Strauss Hauer & Feld in addition to Alvarez & Marsal. According to The Block, Celsius has also engaged the assistance of global investment firm Citigroup to give advice on potential solutions, including a review of a proposal from competing cryptocurrency lender Nexo.

With the planned release of an Android phone and a new company dedicated to web3 mobile apps, the team behind Solana is attempting to barge into the telecom market. Solana Labs CEO Anatoly Yakovenko revealed the new Android phone, called Saga, during a gathering in New York City. The group is creating the gadget specifically for web3, which includes decentralized trading platforms and NFT markets.

The phone will be equipped with a 6.6-inch touchscreen, 512 GB of storage, and private key security features. Yakovenko’s transition into mobile is a reflection of his prior work as an engineer at Qualcomm, where he oversaw teams that developed technology used by companies like Samsung, LG, and Google.

“Almost 7 billion people use smartphones around the world and more than 100 million people hold digital assets – and both of those numbers will continue to grow,” said Yakovenko, a Solana co-founder. “Saga sets a new standard for the web3 experience on mobile.”

The main product of Solana Mobile, a recent division of Solana Labs, is Saga. Solana Mobile will provide developers with a framework to construct mobile-first cryptocurrency apps on the Solana blockchain in addition to expanding Saga.

Since March 2020, the situation for miners has drastically changed, ranging from extraordinary profitability to margin squeeze. Data now reveals that certain players have been heavily hurt by the decline to $17,600, which is 70% below the all-time highs for BTC/USD reached in November, with miner wallets moving significant quantities of coins to exchanges.

According to CryptoQuant, this pattern typically occurs before the latter phases of the Bitcoin sell-off. This month, the sales of miners have been closely monitored; the Bitcoin Twitter account even described the situation as miners “being drained of their coins.”

“For miners, it’s time to decide to stay or leave,” CryptoQuant CEO, Ki-Young Ju, added in a Twitter thread last week. Although the situation is precarious, most miners are still working, as seen by the network fundamentals, which have dropped only marginally from all-time highs of over 30 trillion.

However, trader and analyst Rekt Capital repeated its skepticism over the strength of overall buying volume, contending that sellers were still driving market moves instead.

Despite the current price being almost $2,000 below the 200-week moving average (MA), which served as a crucial support level during prior bear markets, buyers have not shown a lot of interest.

Cristiano Ronaldo to get football fans into Web3 with Binance partnership

A multi-year nonfungible token (NFT) collaboration between Binance and football legend Cristiano Ronaldo has been inked. Through worldwide NFT initiatives, the partnership intends to attract soccer fans to the Web3 ecosystem.

Binance added that the deal included developing a number of NFT collections with Ronaldo in the statement it gave to Cointelegraph. With the initial collection debuting later this year, they will only be sold on the Binance NFT platform.

Athlete Cristiano Ronaldo has “transcended sport to become an icon in numerous sectors,” according to Binance CEO and founder Changpeng Zhao, who also complimented the player for his soccer feats. Furthermore, Zhao stated:

“He has amassed one of the world’s most dedicated fan bases through his authenticity, talent, and charity work.”

As owners of NFT collections, Zhao continued, the Binance team is thrilled to provide Ronaldo fans “exclusive engagement opportunities to connect with Ronaldo.” The soccer legend also spoke about the future NFT releases, predicting that fans will love them. According to Ronaldo, the relationship with the fans is very important to him, so the idea of bringing unprecedented experiences and access through the Binance NFT platform is something that he wanted to be a part of.

SaTT has successfully launched Tiktok oracle which will enable users to earn crypto With SaTT through Tiktok social networks.

1. Explain what SaTT is during your TikTok & add a picture of the campaign kit

3. Write a positive sentence about SaTT in your description

And of course if you still haven’t bought SaTT, then its at your fingertips now through the integration with Apple Pay or Credit Card as payment methods. Well, of course in order to purchase SaTT on Trust Wallet, you must be a Trust Wallet holder first and foremost. It’s only a few steps, and we have made a comprehensive video demonstration of these steps required, here 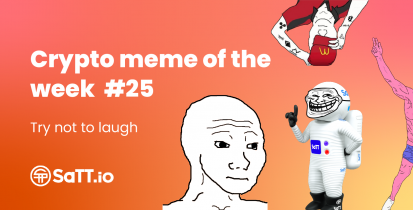 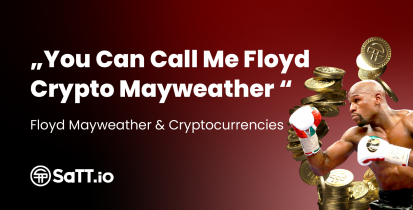