El Salvador’s president, Nayib Bukele, has confirmed that volcanoes are now being used to mine bitcoin. At the time of the report, It has mined 0.0059 BTC worth $260 so far. “We’re still testing and installing, but this is officially the first Bitcoin mining from the volcano,” tweeted Bukele, providing a breakdown of the mining rewards so far.

This comes after Bukele posted a video on Twitter on September 28 showing mining rigs being delivered and set up on the El Salvador site. ASIC miners were being installed and plugged in during the video.

El Salvador became the first government to recognize bitcoin as legal cash last month. It also developed the Chivo wallet, which allows citizens to use the Bitcoin network and make payments. Anyone who signed up received $30 in bitcoin.

The Securities and Exchange Commission (SEC) of the United States has extended the deadline for four Bitcoin exchange-traded funds (ETFs) by 45 days, citing the need for more time to consider whether to approve the 19b-4 applications.

In its official statement, the SEC outlined:

Invesco, a New York-based financial business, teamed up with Galaxy Digital Funds to register a Bitcoin ETF dubbed Invesco Galaxy in mid-September. The ETF security solution, which is now pending clearance, has the potential to be listed on national US exchanges, with potential clients assured that all private keys would be strictly protected by a variety of technological and physical deterrents.

TikTok will launch a non-fungible token (NFT) collection in which its top content creators will collaborate with top NFT creators.

These artists will collaborate with COIN ARTIST, x0r, RTFKT, Grimes, and others to create limited edition NFTs honoring their viral videos.

The proceeds from the NFT sales will “mostly go straight to the creators and NFT artists engaged,” according to TikTok. The earnings from the Brittany Broski and Grimes collaboration, on the other hand, will be donated to charity.

The sale begins on October 6, but the films will also be on display at the Museum of the Moving Image in Queens, NY from October 1 to November 5 in a show called Infinite Duets: Co-Creating on TikTok.

Bulls made their intentions obvious on Oct. 3 when they briefly pushed Bitcoin’s (BTC) price above $49,000, prompting several traders on Crypto Twitter to urge for the top-ranked digital asset to break through psychological resistance at $50,000.

Bitcoin’s weekend gains came after a wild week in which markets struggled to find their footing as further regulatory crackdowns in China weighed on investor mood. By the end of the week, US Federal Reserve Chair Jerome Powell had provided some encouraging news, confirming that the Fed had no plans to ban cryptocurrencies.

ICYMI: SaTT Is Set to Pioneer Blockchain-based Advertising As It Unveils Its Social Media Monetization Platform

SaTT has been making news in the cryptocurrency space since its record-breaking $7.1 million ICO in 2020, as it garners enormous support towards realizing its long-term aim. Atayen, Inc. created SaTT, which stands for Smart Advertising Transaction Token, with the goal of changing the advertising environment.

The initiative is about to introduce the concept of Advertising Pools, or Ad Pools, which will launch alongside social network farming, allowing corporations and organizations to reward creators more openly in the future. Atayen made a remark when asked about the significance of the impending launch:

“To showcase proof-of-concept for the technology, Atayen is offering the first Ad Pool on YouTube for interested early adopters, entitled Proof Of Concept: YouTube Challenge. Throughout the process, Crypto YouTubers can discover the advantages of SaTT firsthand and earn the SaTT cryptocurrency with their YouTube channels.”

The Ad Pool will begin with a total of 100 million SaTT tokens, with the goal of obtaining a total of 5 million views. In order to attain this milestone, creators will have to fulfill some specified performance-based standards provided by the company.

Ad Pool, according to Atayen, would allow content producers to automatically earn SaTT through Post Farming, which requires them to reach a specific amount of views, likes, or retweets. Once the requirements are met, creators will receive the SaTT token and the balance will be transferred. 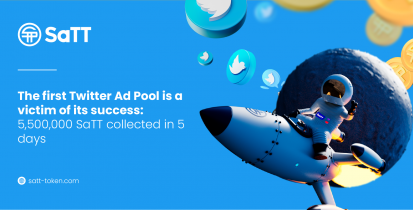 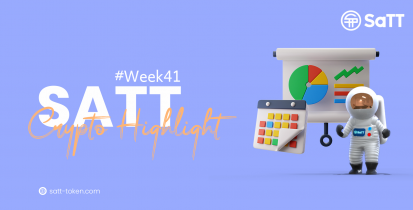